The Rail Rifle is a devastating Sniper rifle used by Tau Pathfinders[2] as well as Sniper Drones.

Using linear accelerators to launch a hypervelocity, trilium-tipped solid dart, the Rail Rifle is capable of mortally wounding even the larger Tyranid bio-organisms, though the heavy armour plating found on Broadside Battlesuits offers some protection. While loaded with over a hundred rounds, the energy requirements for firing even a single slug requires the use of an entire cartridge power cell, a fact more than compensated for by the weapon's stopping power and penetration.[1]

Though the Tau have utilized Rail Weapons since the First Sphere of Expansion, they initially proved far too large to use as an infantry weapon. Early Tau rail weapons required substantial shielding in order to avoid flooding their Hammerhead and Battlesuit pilots with radiation. These shields were inevitable formed from super-dense metal alloys and contributed greatly to the size of the weapon. Progress on fixing this flaw was slow for many years as the Earth Caste tried to improve the design and create an infantry-portable weapon. The breakthrough finally came during the Second Sphere of Expansion when the Tau reverse-engineered the ceramic shielding on Imperial Nova Cannons. Dubbing the new material "or'es'var" or "mighty bulwark", its radioactive absorbing abilities combined with its light weight made it ideal for infantry use.[3] 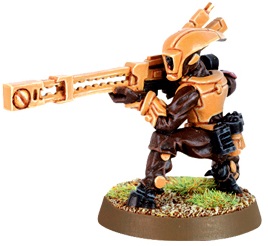 Tau Pathfinder with a Rail Rifle