Ramilies Class Star-forts are a class of gigantic semi-mobile space stations capable of moving through warp space. This class of star-fort exists in scant supply and are vital to the Imperial Navy as forward fleet bases, each one is capable of shortening campaigns by decades through it's deployment.[1]

The Ramilies class Star-fort is of ancient construction, made from STC data, it has been in use since the Great Crusade and still forms a vital lynch pin in Imperial strategy.[2]

The Ramilies is so large that it does not have conventional drives, and has to be towed through the warp by other vessels to relocate it. Each quadrant of the fort has masses of powerful weapons batteries and lances, and the central basilica houses many torpedo silos providing powerful salvos to offer extra support to each quadrant.

There are four pairs of Attack Craft launch bays, one for each quadrant. They facilitate docking points to anything up to cruiser size to resupply and repair, even amidst the heat of battle; as Ramilies tend to only be deployed in massive engagements. So there is enough fire-power from the fort and other ships to ensure the repair crews are not disturbed during work. Only well known and successful admirals, or Inquisitors, are entrusted with a Ramilies, as they can take centuries to build.

It was designed by the hitherto unknown Artisan Magos Lian Ramilies from STC materials captured in the purgation of the 'Stone World' Ulthanx. Star Forts can be relocated through the Warp in a projected Gellar Field 'bubble', and though this is an extremely dangerous operation, each Star Fort, thanks to their heavy armour, supply and repair facilities, and formidable defensive weaponry can strongly increase the operational capacity of Imperial fleets.[2] 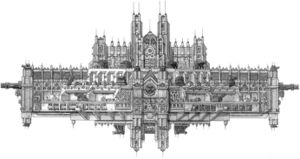 The last accredited destruction of one was in the Tauran Annulus in M39. Ork raiders have captured partially crippled Ramilies at least six times, most memorably in the notorious 'Skaggerak Incident' during the Segmentum Obscurus fleet review of 975.M41.[3]

Different sources have used different spelling for the Star-fort class - both "Ramilles"[1] and "Ramilies"[2] have been used in official publications.