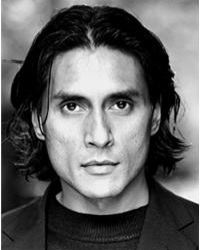 Ramon Tikaram is a British actor of combined Indian-Fijian and Malaysian ancestry.

His recurring television roles include Ferdy Garcia in This Life, Richard Holloway in Murphy's Law, and Qadim Shah in EastEnders. He also appeared as Prendahl na Ghezn in the third season premiere of Game of Thrones. His prominent film roles include Kama Sutra: A Tale of Love.

Recently he toured the United Kingdom as the King of Siam in a stage production of the musical play The King & I.

Other voice roles include the video games Fable III, Gabe Weller in the Dead Space series, James Bond 007: Blood Stone, Risen 2: Dark Waters, and Omar Ben Salaad in The Adventures of Tintin: The Secret of the Unicorn.

At the 2012 Black Library Weekender, James Swallow, C.Z. Dunn and John French all expressed high praise for Tikaram's voice work, particularly his portrayal of Rogal Dorn in Burden of Duty.