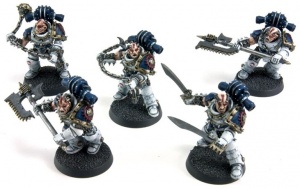 Rampagers were elite squads of World Eaters infantry used during the Great Crusade and later the Horus Heresy.

These shock assault troops formed the most savage and bloodthirsty warriors in a Legion already known for its fury. All possessed the prohibited psycho-surgery that drove them to even greater heights of rage, some so far gone that they had to be restrained between battles and were simply known as Caedere or 'Butchers'. Others focused their desire for slaughter through martial discipline, mastering a variety of savage weapons patterned from those used by Angron in his gladiatorial arena days.[1]

Besides the standard Excoriator Chainaxes some Rampagers were armed with meteor hammers, barb-hook lashes or paired Falax blades.[2]