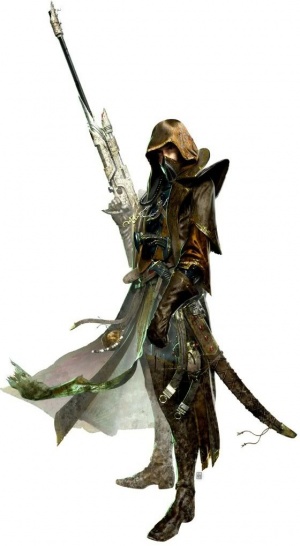 Rangers can often be seen seeking out threats from Chaos and visiting Exodite worlds on the galactic rim in an effort to experience life more fully. Sometimes they receive a psychic distress call from their home Craftworlds and will take their arms back to defend it.[2] Rangers often arm themselves with Ranger Long Rifles as this allows them to make the most of their individual approach. Another benefit of working alone is their ability to move through terrain and chose the optimum position for sniping enemy emplacements. They are also adept at hiding in undergrowth and other types of cover due to their stealthy nature.[1] Their armour is a mesh suit with Eldar carapace plates attached to it. As a result, it is very flexible, allowing Rangers to move freely. However, this flexibility comes at the expense of protection, as this armour is useless against bolter fire. Another piece of Ranger equipment is a Cameleoline cloak, which helps Rangers to blend into their surroundings, especially in poorly-lit environments [4]. They also ride atop Shroud Runner Jetbikes[12]. Finally, many Rangers captured by the Imperium possessed sensor spikes containing something that was determined to be a psychotelemetric receiver. It is suspected that this device allows Rangers to use the Webway to see distant places.[4]

Pathfinders are Rangers that have walked the Path of the Outcast for centuries. They have overcome their temptations, but still feel the call of the Path. They are even more skilled at infiltration and survival than other Rangers.[3] While pathfinders can be found across the galaxy from every craftworld, by far the most famous are those hailing from the craftworld of Alaitoc, where they prefer to call themselves the Starstriders[5]. Alaitoc society is highly dedicated to "the path". Individuals are therefore more prone to rebel against the disciplined lifestyle and seek adventure as Outcasts, more so than those of other Craftworlds.[Needs Citation]

Pathfinders have become adept over the centuries at roving ahead of the main Eldar warhosts, using their guerrilla expertise to sabotage their enemies before battle has even commenced. Bypassing sentries, sabotaged machinery, destroyed supply dumps and even the mysterious assassinations of key leaders take their toll upon both the enemy's numbers and morale, leaving them to chase shadows and go mad as they attempt to pull fragments of their armies back into cohesion as the Eldar strike at their weaknesses with brutal yet hauntingly subtle efficiency.[Needs Citation]

Shroud Runners are two-man crewed Raptor jetbikes that are used by rangers. Besides the pilot, they also seat a pillion-riding partner who serves as a sniper.[12]

Fate Dealers are Eldar Rangers that are part of Eldar Corsair warbands.[13]