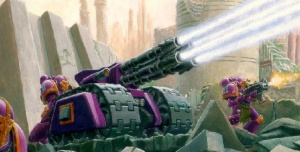 The Rapier Armoured Carrier or Rapier Laser Destroyer is a tracked weapons carrier used by the Imperium of Man, including the Imperial Guard, Adeptus Mechanicus and Space Marines. A potent anti-tank weapon, it mounts a powerful multi-barreled laser cannon with which it shares its name. However Rapier's have also been seen wielding Graviton Cannons, quad Multi-Lasers, quad Mortars, and quad Heavy Bolters.[5] 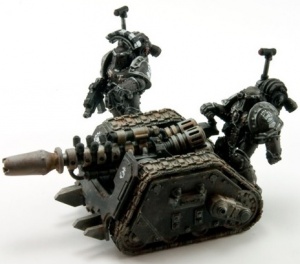 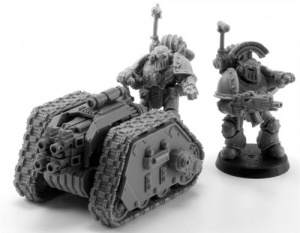 In the early years of the Imperium's history the Rapier was a common weapons platform used by the Imperial Army at both the company and regimental level. Under ideal conditions each company would have a support squad with five Rapier carriers plus other weapons, while regiments had support companies of ten machines each, such as five Rapiers and five Mole Mortars, though attrition often accounted for fewer numbers of these weapons. Rapier crewmen wore the blue uniform of artillerymen, with yellow shoulder pads displaying their company insignia or red ones displaying their regimental insignia depending on their assignment.[1]

Over the millennia however the number and use of Rapiers declined due to difficulties in manufacturing these complex devices, and have been largely supplanted by designs simpler to construct and easier to maintain. There still remain tens of thousands deployed throughout the Imperium, mostly in the hands of the Adeptus Mechanicus or those Planetary Defense Forces on worlds which still retain the capability to produce and maintain them. They are in more limited use by the Space Marines and Imperial Guard regiments.[3] Those Chapters which descend from the Imperial Fists and Iron Hands Legions are especially known users of Rapiers, and have even employed them for boarding assaults.[4]

The armoured carrier is built around the weapon system with which it has become synonymous, the Rapier Laser Destroyer. This multi-barreled weapon achieves greater firepower than even a normal lascannon by focusing its four separate laser systems with precise accuracy on a single point. This is possible thanks to a weak machine spirit which can adjust the convergence of the beams depending on the target's range. However, the weapon system has tremendous power requirements, along with increased maintenance and heat build-up due to its moving parts and the close proximity of multiple laser chambers to each other.[3][4] Rapiers have also been seen mounted with Graviton Cannons, quad Multi-Lasers, quad Mortars, and quad Heavy Bolters[5] though at the M41 the technology to manufacture the Rapiers with Graviton Cannons was all but lost as it seems.[7]

As it was initially designed for defending cities and fortresses the Rapier has limited mobility, enough to move into ambush positions and across rough terrain, and is often fielded in special batteries of one to three Rapiers used to break up enemy armour attacks. The system can move and fire at the same time thanks to an auto-drive and benefits from targeter equipment. Actual aiming and firing of the laser destroyer however is handled by the on-board machine spirit making the Rapier a semi-independent system; its crew is necessary only for moving the weapon and operational mode selection.[1][3]