The Raptors are a Successor Chapter of the Raven Guard, created in the Second Founding.[5]

The Raptors' history begins in M31, when the Chapter is rumoured to have begun life as a Raven Guard Legion company of new initiates training on Deliverance at the time of the Drop Site Massacre. After serving with distinction the company was honoured as a Chapter and the Raptors were founded during the reforms initiated by the Codex Astartes. The fledgling Raptors now begin their service to the Imperium as a fleet based chapter hunting down the forces of the Traitor Legions.[6]

Several centuries after their founding, the Raptors were granted a homeworld on the edge of the Eye of Terror the name of which is lost in the passage of time.[6]

Sometime between M34 and M36, the Raptors' original homeworld is believed to have been destroyed some time during the 4th or 5th Black Crusade.[6]

In M37, Imperial records list the Chapter as destroyed or missing in action.[6]

In early M39, the Raptors appear on the Imperial order of battle during the Caberiad Wars at full chapter strength. They are now based on a new homeworld within the Sutters Spiral Nebula and do not reveal its exact location or name.[6][8a] 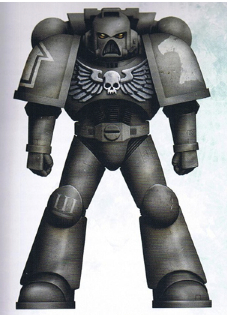 In 701.M36 at the direct request of Sehmentum High Command Raptors blockaded Origo System. As a result all of the system's population disappeared. It is remained a mystery what happened there and dozen highly ranked Lord Inquisitors, in particular of Ordo Xenos have vanished in attempts to determine the truth.[12]

775.M41-777.M41 (Fourth Quadrant Rebellion): The Raptors, along with the Dark Angels, Skull Bearers and Red Wolves are called upon to pacify the Fourth Quadrant and help quell the largest civil war the Imperium has seen in one thousand years. During their three-year involvement the Raptors fight alongside elements of Battlefleet Solar focusing on the Sulsalid Sub-sector where several Imperial taskforces have been unsuccessful at stamping out the ideas of "progress" and "democracy" which have taken root at the sub-sector capital Auranar. The Raptors take command of the Imperial Guard units and make use of them as diversions for the many precision strikes against the enemy's command and supply infrastructure. With the enemy forces in disarray following these strikes the Imperial Guard are able to overwhelm the majority of traitor units while the Raptors assault the sky-palaces of the Sulsalid Ordinators, mercilessly killing them and thus ending the revolt within the Sulsalid Sub-sector. It is worth noting that during this action the Raptors fought at full chapter strength, something unusual for the often independently operating companies.[6]

906.M41: The Raptors answer Inquisitor Legate Jarndyce Frain’s call for assistance fighting the Secessionist forces in the Badab Sector. Arriving alongside the Red Scorpions, Fire Angels and Salamanders, the Raptors, led by Lias Issodon himself, deploy their 2nd, 5th and 6th companies bolstered by assault reserves and scouts. The committed fleet elements for the Raptors include the battle barge War Talon, two strike cruisers, the Arias Vex and Shadow Stalker all accompanied by ten Gladius Frigates.[6c]

Offering himself for command of the loyalist Marine forces in the Badab Sector Lias Issodon is passed over and Master Carab Culln of the Red Scorpions is selected. This decision causes no ill will or resentment between the chapters and despite the obvious differences between them, many lasting bonds are formed.[6c]

The Raptors engage in frontline combat duties and act as mobile reserves during the first year and a half of combat in the sector. Of particular note is Operation Sedna wherein tasked with liberating the planet Surngraad, the Raptors devise a cunning plan to assault the polar defence fortress. The successful execution of the plan allows for the Raptors and Salamanders to retake Surngraad. Losses during Operation Sedna include severe damage to the battle barge War Talon, this however does not remove it from the war.[6c]

907.M41: Participating in some of the heaviest fighting of the war takes its toll on the chapter and by year's end it is estimated the Raptors have lost between 35% and 60% of their original fighting force. The worst losses are inflicted during fighting against the Mantis Warriors and Astral Claws in the Gargathea System and include the destruction of the strike cruiser Arias Vex. The losses are not in vain, however, as the Raptors help achieve the eventual victory on Gargathea III, a victory that in no small part is also due to the Raptors' ability to match the Mantis Warriors' tactics of ambush.[6c]

908.M41: Deemed "combat-ineffective" after suffering heavy losses and with the intent of allowing the chapter to rebuild, the Raptors are ordered withdrawn from the war. The Raptors now focus their attentions to the growing wars in the Ultima Segmentum. The Shadow Stalker and a small force do remain in the Maelstrom Zone for some time, however, though the exact reason for this is unknown.[6c]

In 969.M41, while en route to assault the Ork World of Gramnia Major in the Segmentum Solar as part of the crusade against the Arch Maniac of Calverna, the Raptors' ships were thrown off course while in the Warp. When they emerged, the chapter was forced to crash-land their battered ships on the nearest planet, the Death World of Jemadal.[2]

Jemadal is an orb of dense, slimy jungle, stagnant and dank to a suffocating degree and teeming with voracious predators and carnivorous plants. The atmosphere of the planet is so heavily saturated with moisture that the air is literally suffocating. Previous attempts to terraform the planet by the Adeptus Mechanicus had been abandoned centuries before and to survive an hour on Jemadal is an achievement. The world is also infested with predators and each day the Raptors came under attack from swarms of carnivorous beasts and bat-winged creatures that could kill an ordinary man with a single bite.[2] 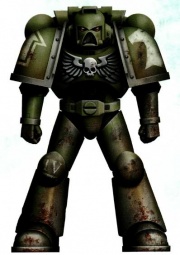 As the breathable air in the Raptors' armour began to run out and the oxygen supplies dwindled, the Chapter's Techmarines desperately sought a solution. The Techmarines were able to modify the breathing apparatus of the Power Armour's helmets to incorporate an osmotic gill that filtered the oxygen from the heavily moisturised air. This modification proved highly effective and the Raptors were able to subsist on a diet of indigenous plants and fungi.[2]

In 976.M41, after surviving on Jemadal for seven years the Raptors were rescued from the Death World by the Ultramarines Battle Barge Rath's Honour.[2]

998.M41 — The constant struggle on Jemadal had transformed the Raptors into jungle warfare specialists, and with the outbreak of the Third War for Armageddon the Chapter and their skills are quickly called upon. Five Companies from the Chapter deploy throughout the equatorial jungle and vapour woods with the Armageddon Ork Hunters and Catachan Jungle Fighters where their deadly jungle warfare skills are put to best use.[2]

998.M41: During the Taros Campaign the Raptors commit a strike force of the 3rd and 6th Companies, led by Captains Orelius and Kaedes, respectively.[4b] The companies are garrisoned abroad the Battle Barge War Talon during the operation.[4a] This force is initially responsible for spearheading the invasion of Taros and neutralising the planetary defences.[4c] During the eventual retreat of all imperial forces from T'ros, the Raptors are tasked with forming the rear guard and ensuring remaining Imperial forces and loyalists are able to flee in relative safety.[4d] While directing his battle-brothers, Captain Kaedes is struck repeatedly in the right arm and upper torso with molten shrapnel. He is later interred in a Dreadnought.[4d] 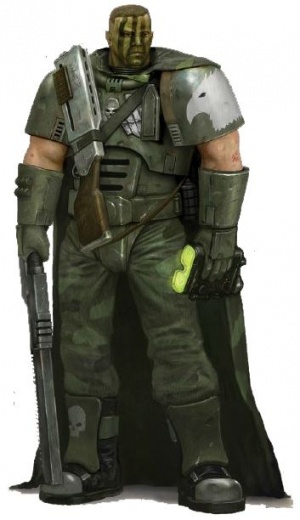 Like their predecessor chapter, the Raptors have a malfunctioning Melanchromic Organ, leading to pale skin and blackened hair. The Mucranoid is likewise missing. Unlike the Raven Guard, however, the Raptors still have a fully functional Betcher's Gland. It is unclear if the gland was somehow recovered or its loss among the Raven Guard occurred after the founding of the Raptors.[8b] The Chapter as a whole expresses a great skill at marksmanship, even by Astartes standards. It is uncertain if this is innate in the gene-seed or a result of superb training.[8c]

The Raptors follow their progenitors, the Raven Guard, in adhering to the broad organisational patterns and provisions laid down in the standard Codex Astartes, but as a Chapter, the Raptors see the Codex as a highly effective and proven set of strategic and operational guidelines rather than inviolable dogma to be obeyed without question. As a result, they maintain a high degree of flexibility in their deployments and structures.[6] Each of the companies operates on a largely independent basis, fighting across the breadth of Imperium. It is only in dire situations that multiple companies will fight together.[8c]

Although ranged hit-and-run tactics seem to be preferred over close quarters fighting, the encouragement of independent thought within all levels of the Chapter means that it is not uncommon for combat methods to differ widely either when operating in isolation or in concert with each other (the former being more common). This independent spirit allows for the most appropriate application of resources and/or tactics for a given mission ranging from the use of warzone specific camouflage to ad hoc unit composition and even working with local forces to ensure success.[6]

Apart from the equipment found within a typical Astartes armoury, the Raptors are known to make extensive use of scouts and also keep a sizeable contingent of all Land Speeder variants.[6] The Chapter is notably missing all early trophies, records, and much of its most valuable and ancient wargear due to the destruction of their original homeworld in M34 or M36.[8a]

Noted Elements of the Raptors

The colour scheme and name of the Raptors have changed from their first appearance found in White Dwarf 101 (UK) where they were listed as the Raptor Legion with blue and yellow armour (see below). This same colour scheme also appears in the publication How to Paint Space Marines[7] and at an unknown time on the Games Workshop website.