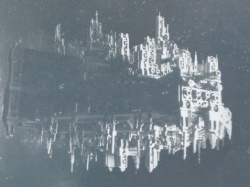 The Raptorus Rex was a Star Fort of the Fire Hawks Space Marine Chapter that served as their mobile Fortress-Monastery. Believed to predate the Imperium in its construction, at its time in the 41st Millennium the massive station had enough firepower to single-handedly challenge a Cruiser squadron and was one of the most powerful space vessels in the Imperium. The Raptorus Rex gained infamy during the Badab War as the single most powerful warship operating in the theatre.[1]

The Raptorus Rex was declared lost in the Warp along with the rest of the Fire Hawks Chapter in 963.M41. However, it is said to have been used by the Legion of the Damned during the Cholercaust in late M41.[2]