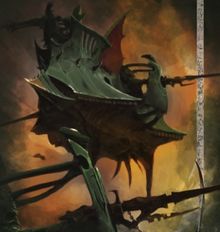 The Ravager, also known as the Ravager Gunship[1] is a Dark Eldar vehicle built on a nearly identical chassis to the Raider.

The Dark Eldar commonly use the Ravager to emerge from a Webway portal and wreak havoc on enemy armour, fortifications and personnel. The Ravager was converted from the original transport vessel to a heavy fire support vehicle, and has fortified front and side armour. Ravagers are equipped with three heavy weapons, usually Dark Lances or Disintegrator Cannons. Ravagers may also be equipped with other kinds of wargear, like the Horrorfex, Torment Grenade Launcher, Night Shield, Screaming Jets, Slave Snares, Shock Prow, Splinter Racks, and Scythes. They are also equipped with sophisticated targeting arrays which display precise information about their enemy. This makes up for what it lacks in armour with speed and firepower.[1]

In battle, Ravagers are nimble and swift, using their maneuverability to destroy more lumbering Human or Ork tanks. Ravager gunships are so fast and maneuverable that they can ambush an enemy tank and destroy it in a single pass, vanishing before the enemy even realizes what hit them. Their capabilities are further improved through their tactics, with Ravager crews being well-trained and well-briefed about their targets capabilities. Their commanders will assign then specific targets in battle, ensuring that the Ravager formation operates as a unified, efficient killing machine. A well-trained and led Ravager squadron is capable if appearing from nowhere and destroying even a Titan of the Adeptus Mechanicus in a single volley and disappearing over the horizon before the behemoth machine has even toppled to the ground.[1]