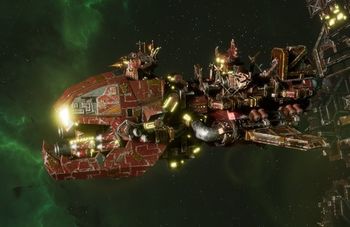 The Ravager Attack Ship is an Ork torpedo boat.

Unlike in Imperial fleets, torpedoes are not a major strategy for the Orks, probably due to the unreliability of their reloading teams and the poor quality of those torpedoes. As such, Ravagers are rarely seen in dedicated squadrons the way that Imperial Cobra Destroyers are, instead being more commonly mixed in with Onslaughts and Savages.[1]

All the downsides inherent in Ork torpedo usage are made up for by the sheer size of a Ravager's torpedo launchas. With a bit of luck (which is helped by having some captured torpedoes on hand), a volley from a Ravager can equal that of an Imperial Cruiser.[1]