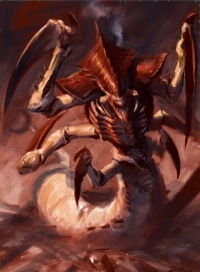 A Ravener is a Tyranid species adapted for fast assaults, surprise raids and swift pursuits.

Raveners are capable of burrowing under the ground for long distances and moving over all manner of terrain at alarming speeds. They have spade-like Scything Talons for digging, snake-like bodies for agile movement, and thorax-mounted biomorphs such as Devourers and Deathspitters.[1b] They also bear some resemblance to the Tyranid Warrior species.[1a]

Raveners have highly sensitive auditory and visual senses that can detect a broad range of vibrations and energy bands, allowing them to hear small tremors on a planet's surface and also giving them the unique ability to "see" energy-forms emitted by Vox transmissions, sensor-stealth technology and even Teleport Homers. They can effectively hunt prey by detecting an unguarded signal and tracking it back to its origin. Thus the enemy's technology is turned against them, and any concealed outposts or infiltrators are not hidden from a Ravener.[1a]

Raveners, like many Tyranid organisms, are essentially unthinking beasts when not under the influence of the Hive Mind. They lose all sense of priority, reverting to the animalistic joy of chasing down a panicked and fleeing foe rather than attacking closer stationary targets.[1a]