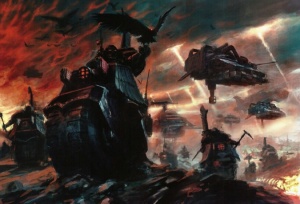 The Ravenwing is the Second Company of the Dark Angels Space Marines Chapter. Like the First Company, the Deathwing, the Ravenwing are not part of the Codex Astartes structure - although the remaining companies of the chapter adhere to the Codex. Although a versatile and tactically flexible fast-attack force, the true role of the Ravenwing is to hunt members of The Fallen. This secret is only known to high-ranking Black Knights and members of the Inner Circle.[6a]

The current Master of the Ravenwing is Sammael, who rides to battle on the last known surviving Imperial Jetbike. 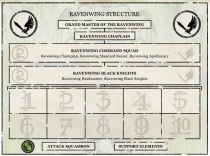 Organization of the Ravenwing

The origin of the Ravenwing dates back to pre-Imperial times; originating from both Terran and Caliban. The original incarnation of the Ravenwing of Terra drew from the Hosts of Wind and Void of the Hexagrammaton.[11] On Caliban it drew from a mounted cavalry section of The Order known as the Order of the Raven who rode black horses and "could survive alone in the deadly forests of Caliban, heroic figures in matt black armour and winged helms."[4][9] While its title originates from Caliban and it was heavily reorganized by Lion El'Jonson, its role was designed by the Emperor during the Unification Wars as part of the Hexagrammaton.[7]

The Ravenwing is a highly specialized formation where speed is more important than heavy firepower. To this end, all of the marines in the company ride into battle on Bikes or Land Speeders on land, including specialized vehicles such as the Land Speeder Vengeance and Darkshroud.[1] In the air, the Ravenwing employs Dark Talons and Nephilim Jetfighters.[5] The Ravenwing's hidden role within the chapter is that of mobile hunters, eternally prowling for their traitorous ancestors, The Fallen.[2] Instead of the usual dark green panoply of the rest of the chapter, the Ravenwing's armour and vehicles are painted jet black, echoing the original colours of the Dark Angels Legion. The Ravenwing also contains specialized sub-formations, such as Ravenwing Command Squads, support squads[6b], Apothecaries[13], Champions[13], Ancients[13], and Ravenwing Black Knights, the latter of whom are the most hardened veterans of the Ravenwing with access to the 2nd Company's Inner Circle.[5] It is these warriors that know the Ravenwing's true mission, hunting the Fallen, and thus they are closely monitored by Chaplain's to make sure their loyalty is in check.[8]

During battle, should the Ravenwing face an especially dangerous task they activate the teleportation homers on their bikes, summoning a force of Deathwing and all but guaranteeing victory.[8]

In 666.M38, three successive Grand Masters of the Ravenwing were lost in a single year hunting a group of Fallen, resulting an unprecedented two-decade period where the Ravenwing had no Grand Master, instead using the Master of the Angels of Vengeance as its commander until a suitable replacement could be found.[6b]

In previous editions of the game the Master of the Ravenwing could be fielded on a bike or custom Land Speeder.[3]