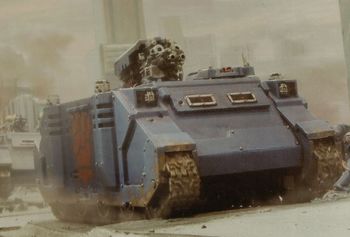 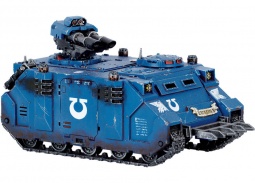 Ultramarines Razorback with a lascannon turret.[2] 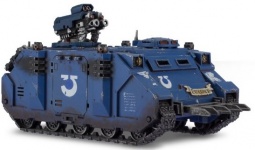 The Razorback is a tracked, armoured vehicle used by Space Marine Chapters. Its design is based on the Rhino chassis and as such is quite easy to manufacture, sharing many of its design features. It is sometimes favoured over the Rhino because of its superior firepower, although this comes at the cost of less transport space. Because the rediscovery of the design occurred after the Horus Heresy, the Traitor Legions rarely field the Razorback.

A variant of the Predator Battle Tank designed to carry troops is believed to be the first precursor to the modern Razorback. However, the STC template for the Razorback was first rediscovered in M36 by Chief Artisan Tilvius while he was exploring the Southern Rim of the galaxy. When he returned to Mars, the Adeptus Mechanicus recognized it from earlier records and commenced work on its production. Within two hundred years the first Razorbacks were field-tested and began seeing service to the Adeptus Astartes soon after.[1]

Some Chapter Masters are wary of using the Razorback, partly because it is a relatively "recent" machine at only 4,000 years old.[4] They also believe it fails both as a troop transport and a battle tank, lacking the transport capacity or firepower and armour of dedicated machines. Others see it as filling a gap between the two, able to provide heavy fire support for squads assaulting the enemy, and freely mix Rhinos and Razorbacks together. Further uses include providing escort for armoured attacks and heavy reconnaissance in coordination with bike-mounted troops.[1]

The standard armament of a Razorback consists of a twin-linked heavy bolter mounted in a turret atop the vehicle. The turret is normally remote-controlled, using a targeting logis-engine similar to that found in Land Raiders. In some cases Razorbacks lack this system, however, and so a second marine or servitor is added to man the weapon, protected from enemy fire by a gun shield.[1]

Standard equipment includes Smoke Launchers and a searchlight. The Razorback can be further upgraded with Dozer Blades, a pintle-mounted storm bolter, a hunter-killer missile, and extra armour.[4]

The capacity of the Razorback is reduced compared to the Rhino, and can carry up to 6 Space Marines in Power Armour, though not in Terminator Armour. The Razorback has the same access points found on the Rhino, however it lacks any fire points due to its turret-mounted weapon. Devastator marines in particular favor the use of the Razorback.[4]

It is believed that Techmarines of the Fire Hawks Chapter formulated a means of overcoming the power feed issue and first used the new vehicle variant during the Badab War, where this advanced type of Razorback was used to smash through enemy fortifications and deliver squads directly through the breach with its Multi-Melta. The New variant was named Infernum Pattern Razorback.[6b] 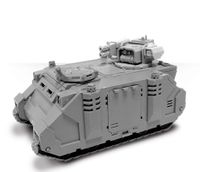 The Razorback Rikarius is a Razorback variant used by the Blood Ravens and others. It was first developed in M37, when a resurgence of Ork forces in the Aurelian System prompted commanders to produce a tank that could eliminate vast amounts of infantry. The resulting vehicle was named after Yriel Rikarius, the Blood Ravens 2nd Captain at the time who had connections to the High Magos M'Lell of Mars. M'Lell ensured the revised Razorback STC was quickly fabricated and put into service alongside the embattled Blood Ravens. Sacrificing transport capacity to mount a variety of weapons such as twin-linked Assault Cannons and two Hurricane Bolters, squadrons of these vehicles have since served many other Space Marine Chapters. In the intervening centuries their numbers have dwindled and the STC lost, which has resulted in the surviving vehicles being treated as relics.[7] 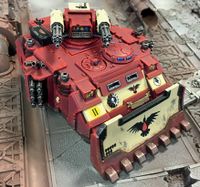 The Vortimer Pattern Razorback is a variant used by the Grey Knights. It mounts twin-linked Psycannons and only a few exist in the Chapter's service. These vehicles were personally constructed by Master Armourer Regis Vortimer himself and were for the Deliverance of Vulgate.[6a] 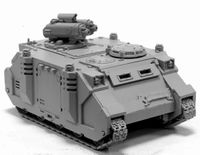