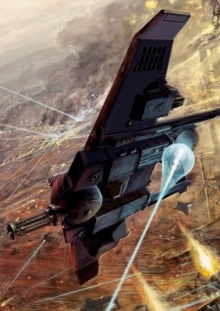 The AX3 Razorshark[3] is a Tau atmospheric strike fighter.[1]

Based on the Sun Shark Bomber design, the Razorshark forgoes the Sun Shark's Pulse Bomb Generator and an Interceptor Drone in favor of additional thrusters for increased maneuverability as well as a Quad Ion Turret mounted in the rear that can turn light vehicles into twisted wrecks. Other armament includes a nose-mounted Burst Cannon and Seeker Missiles stored in internal launch bays. The sleek and agile Razorshark specializes in strike missions, but nonetheless can compete in air superiority operations as well.[1][2]

During the Tyranid invasion of Ke'lshan, the Razorshark proved its effectiveness at aerial attacks in conjunction with Sun Sharks and Mantas. The Super-heavy Mantas blasted away flying Tyranids high in the atmosphere, while just above the planet's surface Sun Shark's swept down to launch Pulse Bombs in order to break up hordes of Hormagaunts. While this strategy played out, it was Razorsharks that scored the highest kill tally, targeting Tyranid Warriors with their quad ion turrets and easily penetrating their frontal chitinous armor. A single attack run of Razorsharks could devastate entire squads of the elite alien warriors. In addition, when infiltrating Tyranids such as Lictors and Raveners emerged to threaten Fire Warriors on the ground, the Razorsharks could swiftly move back to target the beasts.[2]

Traditionally, it is said that the finest Razorshark pilots hail from the Sept of Tash'var.[3]