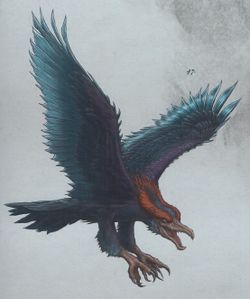 Razorwings are large birds of prey with a wingspan of nearly thirteen feet. They drift along on thermal currents until they have a prey in sight, at which point they dive with such speeds that escape is impossible. Though usually just considered a bird of prey, they have been observed utilizing great intelligence and military tactics while hunting. Such is their rumored intelligence that some have claimed they can set races against one another and communicate.[4]

Razorwings have an insatiable hunger for bone and are incredibly swift. They attack in flocks, surrounding their prey in a deadly hurricane of knife-like feathers and razor-sharp beaks that strip their victim's flesh from their bones. A well-trained Beastmaster's flock will then parade their kill for their master before finally tearing it apart in a savage feeding frenzy. Razorwings are consequently some of the most popular terrors used by Dark Eldar Beastmasters.[1]

Amongst the planets known to support species of razorwing is Chogoris, the homeworld of the White Scars Chapter.[3]