Akin to the more commonly encountered Ravager, the Reaper is a high speed attack gunship used by the Dark Eldar.

Unlike its brother-craft however, its sleek, dart-like hull is built around a single powerful weapon — the Storm Vortex Projector.[1] For all its offensive power, the Reaper, like most other Dark Eldar warcraft relies on speed and manoeuvrability to survive on the battlefield, and disdains the brute attrition of armoured warfare as practiced by the Imperium or the Orks in favour of bloody ambush and predation. The Reaper, though a rare and costly device, is greatly loved by the Kabals and Wych Cults who field them, as the Storm Vortex can be used to easily disable fleeing refugee transports and shuttlecraft with the minimum of collateral damage — all the better for the Dark Eldar themselves to get at the delectable contents within.[2] 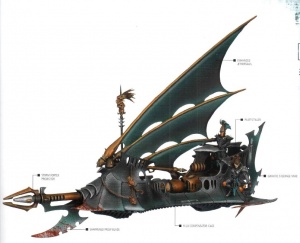