The Reaper Launcher is an Eldar weapon used by Dark Reapers, the Eldar path devoted to providing long range fire support on the field of battle. It is a fast firing heavy weapon which launches a barrage of armour-piercing missiles to devastate the enemy, and utilizes Dark Reaper Range Finder equipment which allows the user to "see" from the muzzle of the weapon itself.[1][2a] While similar to the Missile Launchers used by Imperial forces, Eldar versions of this technology utilize a number of complex chambered pods containing a variety of ammunition types. These pods allow the firer to perform a number of support duties such as anti-tank or anti-infantry, and all but eliminate the need to reload.[2b]

The Torrent Reaper Launcher is a variant of the standard Reaper Launcher, that makes use of a cylindrical drum for magazine-style loading of rapid-fire mini missiles. It increases the Reaper's ammo capacity significantly, but the added ammunition increases the weight of the weapon as well, despite the addition of anti-grav devices.[3] 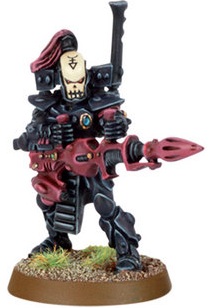