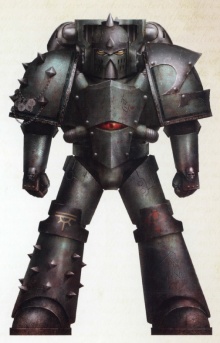 Reaver Attack Squads were specialized Space Marine formations used during the Great Crusade and Horus Heresy era by the Sons of Horus.[1]

Symbolizing the Legion's own way of war, they were heavily influenced by tribal warfare on Cthonia. Reaver units specialized in swift assaults which maimed and disabled their foes, striking down leaders, and mercilessly cutting down any isolated enemies. Acting in the tradition of Cthonian gangs, each Reaver unit was effectively an independent warband in its own right and its warriors fought more as individuals than soldiers.[1]

A number of Reaver Squads were destroyed by Loyalists, in Abaddon's failed attempt to attack the Saturnine Gate, during the Battle for Terra.[2]