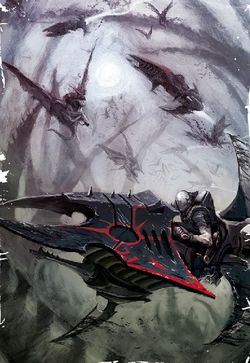 Reaver Jetbikes (riders are often referred to as Reavers) are the twisted Dark Eldar cousins of the Eldar Jetbikes. Using advanced anti-grav technology, these ultra-fast vehicles race ahead of the main force, able to strike at the most vulnerable locations in the enemy's battle line.

Back in Commorragh, they perform in death-races of a Wych Cult's arena. Some of them receive their bike as a trophy on the arena floor, while others may have simply murdered or stolen their way to it. No questions would ever be asked even if a new contestant would appear on the tracks with a recognizable jetbike of another.[4]

Piloted by members of Wych Cults, the bikes themselves are adorned with all manner of spikes, blades and trailing snares. The favored method of attack is in close combat, using the speed of the vehicle to rapidly close on the enemy and to slash with the hull mounted blades as the Reaver swoops past. Riders are highly proficient with this method of attack, able to disembowel and sever limbs with relative ease.[Needs Citation]

The pilots will often retool and adjust not only their bikes but also themselves in every way possible to gain an advantage over other Reavers, from wearing flexible 'second skins' that cut down air resistance to having their bone structure hollowed (much like Scourges) to cut down on their racing weight.[4]

Jetbikes themselves are often of a variable configuration, with the frontal canopy, rear canards and keel blades all able to assume different forms, it is unknown however if this is to aid in combat performance, bike control or merely aesthetics. The standard primary armament is a hull mounted Splinter Rifle which is on occasion upgraded to a Shredder[1], Blaster[1][2], Horrorfex[1a], or Heat Lance[2]. Additional options also include Cluster Caltrops and Grav-talons[2].