The Reclaimers are a Space Marine Chapter.[4a]

Similar to the Iron Hands, the Reclaimers have unusually close ties to the Adeptus Mechanicus, and this association is reflected in several aspects of their Chapter: their Techmarines occupy places of unusual prestige, their Apothecaries are exceptionally skilled in grafting augmetic replacements, and their Power Armour is among the most finely crafted of all Space Marines'.[4b]

The Reclaimers also frequently partner with the Mechanicus in searching out archeotech and new sources of knowledge, often to the point where these considerations outweigh other military factors. For instance, the Reclaimers insisted on boarding the space hulk Spawn of Damnation as it was en route to the Serendipita system, overruling the planet's PDF commanders who wanted to blast the hulk into oblivion before it became a threat.[Needs Citation]

The Space Marines of the Reclaimers wear off-white power armour with yellow gauntlets and faceplates.[4b] Captain Gries wore a helmet with a gold faceplate topped with a black and green crest, but it is not known if this is typical for commanding officers of the chapter, or personal embellishment specific to Gries.[4b] 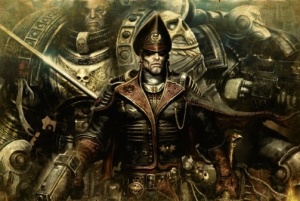