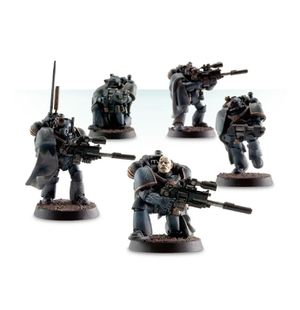 Reconnaissance Squads were a type of Space Marine Legion squad used during the Great Crusade and Horus Heresy.

The eyes and ears of a Legion on the battlefield, these squads consisted of experienced Space Marines expert in operating independently and often behind enemy lines. They were armed and equipped for the task with a variety of specialized weapons such as long-range Sniper Rifles, sensory-auspices, and stealth equipment.[1] The primary mission of Reconnaissance Squads was to perform scouting and intelligence-gathering operations, identify targets and gather information on enemy forces. They also served as the Legion's pickets, saboteurs, raiders, and snipers where needed, and in open battle were expert in sudden flanking manoeuvres and infiltration attacks in support of their main force.[1]

Reconnaissance Squads differ from Scouts of the 41st Millennium in that their members were drawn from fully sworn and trained Battle-Brothers, not Neophytes.[1]