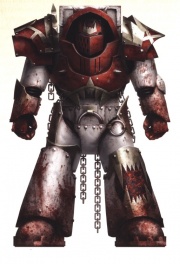 The Red Butchers was a specialized World Eaters infantry formation during the Horus Heresy.[1]

During the Battle of Isstvan III many World Eaters went completely berserk with rage and bloodlust and only left the battlefield in chains. The Techmarines of the World Eaters later made customized suits of Terminator Armour to serve as both wargear and a means of confinement. These suits were, in effect, mechanical prison cells that could be immobilized with the press of a button.[1]

The Red Butchers were unleashed for the first time during the Dropsite Massacre. Few survived the engagement, but they nonetheless ripped through loyalist formations. Moreover, World Eaters that went completely mad in later battles could be imprisoned within recovered suits.[1]

The Red Butchers were adorned in Cataphractii Pattern Terminator Armour and armed with twin power axes. The squad leader, known as The Devoured often had two chainfists.[2]