The Red Corsairs are a Chaos Space Marine warband formed primarily from members of the Astral Claws chapter.

The Red Corsairs are a Renegade Chapter and warband of Chaos Space Marines who lead a vast fleet of pirates composed of mortals and other Traitor Marines that threaten Imperial shipping and Imperial worlds near the Maelstrom Warp riftin the Ultima Segmentum, a region known as the Maelstrom Zone to Imperial astrocartographers. The Red Corsairs were once a Loyalist Space Marine Chapter called the Astral Claws who were based on the world of Badab Primaris in the Badab Sector of the Ultima Segmentum. The Astral Claws were, ironically, raised during the 10th Founding in the 35th Millennium to guard against the numerous daemonic and alien threats emerging from the Maelstrom. Under the leadership of their Chapter Master, Lufgt Huron, the "Tyrant of Badab," in the late 41st Millennium, the Astral Claws sought to have the Badab Sector secede from the Imperium of Man in protest against the Imperium's continued attempts to use the resources of the Badab Sector outside the region rather than dedicating them fully to the defeat of the Chaotic and xenos threats that emerged constantly from the Maelstrom Zone. The Astral Claws and the Tyrant of Badab were able to convince several other Astartes Chapters also dedicated to the protection of the Maelstrom Zone, including the Executioners, Lamenters, and the Mantis Warriors to stand with them against the Imperium in what they believed to be a just cause and an attempt to maintain the traditional autonomy of the Adeptus Astartes in the face of unwarranted interference from the Imperial nobility, economic interests and the often hated Inquisition.[Needs Citation]

Unfortunately, Lufgt Huron had slowly been corrupted by his desire for power into the service of Chaos, and eventually the Imperium was forced to respond to the Secessionists in the Maelstrom Zone by unleashing the full might of the Imperium in the terrible civil conflict that became known in the Imperial record, before the Inquisition laid down an Order of Obliteration that sought to remove all records of the Astral Claws' existence from Imperial history, as the Badab War. This conflict was fought between 901.M41 and 912.M41 and ended in the complete destruction of the Astral Claws defences and the devastation of their Chapter homeworld of Badab Primaris. Only 200 Astral Claws survived the final Imperial assault, and these Astartes, all corrupted by Chaos, fled with the maimed body of their leader into the Maelstrom, where they founded a new Chaotic empire. The other Astartes Chapters who had served the Secessionist cause were eventually forgiven by the Imperium since they had only been misguided and not corrupted, in return for launching themselves upon a series of penitent Crusades. But Lufgt Huron swore his soul and the souls of his remaining Astral Claws to the eternal service of the Ruinous Powers in return for the restoration of his health and the power needed to make war upon the Imperium that he believed had betrayed him and his fellow Astral Claws. Replacing the ravaged portions of his body with bionic augmetics, Lufgt Huron, now calling himself Huron Blackheart, ironically led his corrupt Astartes, now calling themselves the Red Corsairs, back into the Maelstrom Zone to become the piratical raiders that he had so long fought against. In time, the Red Corsairs became the leaders of a vast Chaotic pirate force of Renegades and Traitors that represents a major continuing threat to the Imperium in the Ultima Segmentum[4]. During the Thirteenth Black Crusade, the Maelstrom merged with the Great Rift and the Red Corsairs have now been sighted further from their home than ever before.[18b] 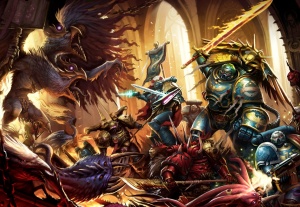 The Red Corsairs fight primarily as an expression of their twisted faith. In order to save what was left of his chapter and his hideously wounded body, Lufgt Huron made a terrible pact with the Ruinous Powers, pledging eternal service in return for the blessings and patronage of Chaos. With limited numbers at their disposal, the Red Corsairs spent much of their time as space pirates, but also launch brutal raids on Imperial shipping and outposts. These raids are not for plundering, but for the sheer pleasure of raiding the areas that they once swore to protect.[Needs Citation] 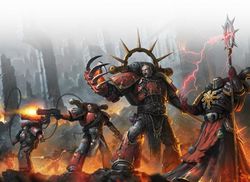 The Red Corsairs are organised into a large fleet, able to deploy small, elite forces of renegade space marines supported by larger groups of human reavers. The Space Marines among the force are supremely proficient at the boarding actions favoured by the chapter whose ship-to-ship fighting prowess is infamous. Huron Blackheart maintains a substantial fleet consisting of vessels captured over numerous engagements, ranging from a single Adeptus Astartes battle barge, a number of strike cruisers, many and varied escorts and a huge number of classes of interceptors and bombers.[Needs Citation]

Over the years through absorbing other bands of Renegade Space Marines and outlaws, the Red Corsairs have grown close to the size of a pre-Heresy Space Marine Legion.[13] While its Space Marines form the core of the Legion's fighting force, the Red Corsairs also includes vast amounts of Traitor Guard, Pirates, Mutants, Xenos, and any other willing to pledge themselves to Huron Blackheart.[23a] Known Xenos warbands in service with the Red Corsairs are the Loxatl[24] and Tarellians.[23b]

The Terminator elite of the warband are known as the Huscarls, serving as Huron Blackheart's personal praetorians.[23a]

Unlike many other Chaos warbands, Huron himself strives only for results and to that end will allow mortals in high-ranking positions and even converse with him somewhat casually and without pomp. That being said, he still demands that all refer to him as Lord.[23a][23d]

The Red Corsairs are a cutthroat warband, with displays of strength being the only thing that determines one position. Huron himself is suspicious of most of his own lieutenants, and is constantly seeking to maintain his power over them.[23b]

The Red Corsairs have no standardized Gene-Seed, instead raiding the Imperium for fresh gene-seed stocks in order to produce their own Space Marines. However the original once-stable gene-seed of the Astral Claws is quickly degrading and prone to mutation, with Chief Apothecary Garreon speculating this may be connected to whatever pact Huron Blackheart made after his wounding in the Badab War.[23b] 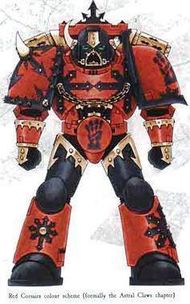