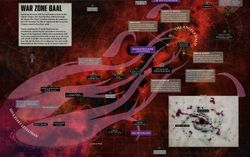 The Red Scar is a sector[3] or subsector[4a][Conflicting sources] of Ultima Segmentum, whose thousands of stars all shine a shade of crimson, tinting its worlds and gas clouds with the color of spilt blood.[1a][4a]

Each of its Systems are cursed with ferocious radiation emitted by these scarlet suns, and life there is exceptionally hard. The Red Scar is rich with valuable resources, though, so the Imperium has established settlements in hundreds of its Systems, despite the cost being billions of lives to do so.[1a]

In the aftermath of the Great Rift's creation, the Tau Empire attempted to annex parts of the Red Scar from the Nem'yar Atoll, but were stopped by the Blood Angels, whose home-System resides in the region[2]. Now, though, the Red Scar has been invaded by multiple tendrils of Hive Fleet Leviathan and the Blood Angels have launched another campaign to save it.[1b]

The Red Scar has been listed as both a sector[3] and a subsector[4a] by different sources.