The Red Talons are a Successor Chapter of the Iron Hands Legion, created during the Second Founding.[5]

The Red Talons are a Second Founding Successor Chapter of the Iron Hands[5], first commanded by the infamous Horus Heresy veteran Autek Mor and recruited from among the most aggressive and volatile warriors of their parent Legion. They are known for their bold style of warfare and never-ending vendetta against the Traitor Legions. The Chapter has also been charged several times by the Lords of Terra with hunting down and destroying renegade Space Marine Chapters.[10]

Their home world of Raikan, lies within the Segmentum Tempestus[6] and their power armour is red with black trim. Their Chapter symbol is a set of red bird's talons on a black circular background and likely ties the Chapter's history to Medusa's Clan Morragul, as they share the same symbol.[7] 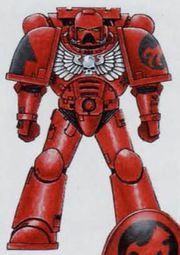