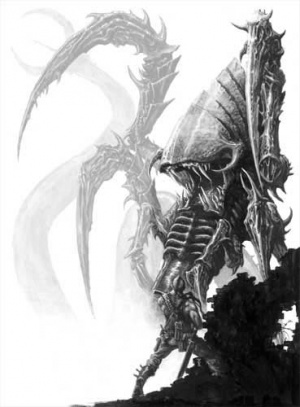 The Red Terror is a particularly deadly Tyranid Ravener, covered in a carapace the colour of blood, armed with sets of great scythe blades and a maw so wide it can swallow a man whole. Some survivors claim the creature is the size of a Ravener, while others swear it is closer to the monstrous size of a Trygon or Mawloc.[1a]

It is only recorded as being encountered once by the Imperium, during the Tyranid invasion of Devlan, an Imperial mining world on the Eastern Fringe.[1a] It tore into a star port compound to get to its defenders, killing twenty-four men before being driven away. Each time it returned it slaughtered more humans before retreating back into the tunnel, devouring the rendered human remains. Eventually a search and destroy team was sent into the tunnels, only to meet their doom at the scythes of the Red Terror.[2]

What became of the Red Terror after Devlan is unknown, though one ship fleeing from Devlan made an automated landing at Adri's Hope and stayed ominously dark and silent after landing. The ship was investigated and found to be a blood-drenched abattoir. A Tyranid creature was suspected to have gotten aboard, though nothing was found within the ship. Three weeks later, Adri's Hope itself had also become a blood-soaked ruin. It is unclear if this beast of Devlan is the Red Terror.[1b]