Redemption Corps is an Imperial Guard novel by Rob Sanders and was first published in April 2010.

Led by the fearsome Major Mortensen, the Redemption Corps is a regiment of ultra-tough storm troopers sent to the deadliest warzones on missions of mercy and destruction. But when Mortensen comes to the attention of the deadly sorority of the Battle Sisters, he not only has an ork invasion to contend with but these fearsome warrior-fanatics too. Caught between the xenos and the fury of the Imperium, can the Redemption Corps fulfil their mission and survive into the bargain? 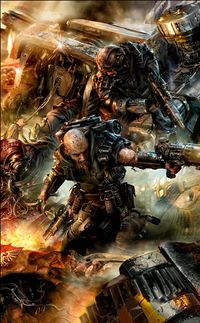