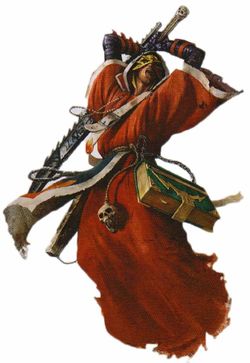 The Cult of the Redemption is an extreme religious sect that worships the God-Emperor of Mankind. It originated on the Hive World of Necromunda, but similar cults can be found throughout the Imperium.

The Cult originated in the violent Underhives of Necromunda, where the original Redemptionists saw the lives of toil of the hive inhabitants, the unreachable luxury of the nobles and the violent anarchy of the Underhive and concluded that they were in a living hell.

The Redemption believes that the only way to achieve redemption for themselves, Necromunda and ultimately mankind, is to cleanse it of its sinfulness. Redemptionist prophets foretell of the destruction of not just Necromunda but of mankind. For Man to be saved it must be purged of sin. Their methods of redemption are highly violent, its members sworn to expunge all sin with fire and blade. Unlike most extreme Imperial sects, Redemptionists do not limit their hatred and violent purges to just mutants, psykers or aliens, they see sin in every creature, which along with the sinner, must be destroyed through bloodshed and fire.

The Redemptionist belief focuses on three sins in particular:

The Cult's prophets foretell the end of the Universe through universal destruction, and their creeds are apocalyptic and unforgiving.[1][2]

The Redemption demands a strict code of conduct from its followers. The creed prohibits the consumption of alcohol or narcotic substances, as well as requiring daily self-flagellation and holy prayer to remain pure. Those who break the rules are driven away and become outcasts. Hivers who do not follow the Redemption are considered to be worthless infidels.

The cult has adherents throughout the hive, while in House Cawdor it has attained the status of the official religion.

As an unsanctioned sect, the Redemption has very little formal organization or physical assets, therefore they are generally limited to impromptu social gatherings in clandestine locations rather than large masses in grand cathedrals. During these gatherings, it is common practice for cult members to wear hoods or masks to conceal their faces during religious acts, though some of the Redemption also believe their faces must be hidden at all times from the sight of unbelievers.

Redemptionists often arm themselves with whatever comes to hand upon the onset of a crusade or mob gathering, though flames or Chain Weapons are most favored.

The religious focus of most Redemptionists is circumstantially inwards, focused on cleansing humanity more than cleansing the galaxy. This is likely due to most hive-worlders having never seen an alien or encountered a warp-denizen. Thus the most likely targets of Redemption crusades are other humans.

To a planetary governor, a raging group of Redemption cultists may be a problem. Mass civilian unrest and hive warfare destroys the order of the hive, in which case it becomes a threat the Adeptus Arbites might concern itself with. The ruling elite of a planet may find itself not pure or pious enough to meet the strict requirements of the Redemption, and could possibly become the subject of their crusades. Thus, efforts are often made by the ruling authority to outlaw and hunt down these extremist cults, before more harm than good can come of them.

However, some groups actively encourage these fanatics, wielding them invisibly as an army of malcontents, in lieu of fielding conventional military forces. The Inquisition, for example, could direct the violent faith of a redemption cult to destroy enemies.

By providing them with weapons and religious encouragement, the Ecclesiarchy sometimes uses Redemptionists to fight proxy wars against common enemies.