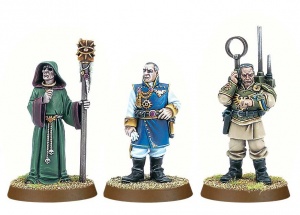 Imperial Guard Regiment Advisors. Left to Right, an Astropath, an Officer of the Fleet, and a Master of Ordnance.[2]

Regimental Advisors or simply Advisors are members of the General staff of the Imperial Guard.

The commander of an Imperial Guard army is assisted by a host of orderlies, adjutants, aides de camp and specialist advisors from outside the regiment who are able to liaise with other elements of the battle group. They are often attached to an Imperial Guard Command Squad.[1]