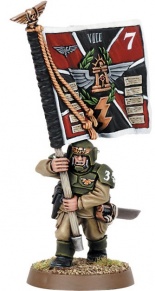 The Regimental Standard is the embodiment of an Imperial Guard regiment, a sacred standard blessed in the greatest cathedral on the regiment's homeworld and presented to it on its founding parade. Listing every great victory of the regiment's previous foundings these banners are highly effective at motivating the troops and boosting their morale; consequently it is a great dishonor if the regimental standard is lost.[2a] It is often be carried by a Standard Bearer as part of a Command Squad.[2b][3]