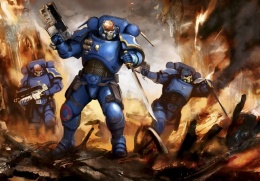 A Reiver Squad is a close combat Primaris Space Marine Vanguard[5] reconnaissance and special operations unit, that wears skull faced helms and is equipped with silent power armour, that has been adapted for stealth work. These are the guerrilla warfare specialists of the Primaris Space Marines.[2]

All Space Marines are experts of the rapid strike, but Reiver Squads take such skills to the next level. They are specially trained and equipped to launch effective unexpected assaults. They do so with a sudden fury and shocking violence, for the Reiver Squads fulfil the role of terror troops that sow fear and confusion amongst their foes. Each member of this Primaris squad is outfitted in Mark X Phobos Armour. The suit’s lighter-weight ceramite and streamlined design allow for greater mobility, and its servo-motors are engineered to be completely silent. Above all else, Reiver Squads depend on stealth and secrecy to accomplish their missions.[3]

To aid them in their role, some Reiver Squads are equipped with grav-chutes, allowing them to be air-dropped to the battlefield from fast-moving transport craft. Using directional fins, the Reiver Squad can glide to their destination from high altitudes and pull out of steep descents when deploying from high-velocity aircraft, hugging terrain contours while flying dangerously low. Less noticeable than Jump Pack infantry Reiver Squads can descend unnoticed behind enemy lines before silently getting into position. Reivers can also use Grapnel Launchers to scale vast heights and cross from building to building. There is nothing that can prepare an enemy for the savage suddenness with which the Reivers attack. Such an unpredictable assault also unnerves those nearby, for the strike is enough to set even well-trained, professional soldiers on the back foot. Against less disciplined troops, the Reiver Squad is more devastating still – the ferocious destruction of one enemy group can set off a chain reaction of panic that ripples down the line as the roaring Reivers move to bring down their next target.[3]

Many Chapters have incorporated Reiver Squads into their attack plans, perhaps none more successfully than the Raven Guard and the White Scars.[3] Chapter Variations of Reiver Squads exist, such as the Hounds of Morkai of the Space Wolves.[4]

Reivers wield Bolt Carbines, Grapnel Launchers, power swords, Grenades, Shock Grenades, and Heavy Bolt Pistols and have had their left pauldrons enlarged, in order to provide them with better protection in melee combat.[1] 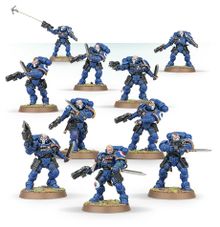