The Relictors are a Renegade Space Marine Chapter, originally known as the Fire Claws. They are believed to have been created from Ultramarines and Dark Angels gene-seed and were one of the Astartes Praeses Chapters[9] which, according to the ancient tome known as the Mythos Angelica Mortis, were created to guard the Eye of Terror[5].

The Epiphany and Renaming

The Fire Claws generally fought in the area around the Eye of Terror alongside Cadian Shock Troopers.[11] When the Emperor's Tarot showed a badly damaged Space Hulk emerging from the warp in the Stygies System in Segmentum Obscurus, the Fire Claws were mobilized to investigate. The hulk was codified as the Captor of Sin and contained a Chaos Warband led by a Champion of Tzeentch known as the Excoriator. The Fire Claws used their Strike Cruisers to cripple the hulk and then sent Terminator Assault Squads to investigate it, led by Epistolary Decario[6i] and the shadowy Inquisitor de Marche. The renegades realized they were doomed and made their final stand in the vast engine room, where Decario and de Marche both fought the Excoriator.[6d][11]

The champion carried a daemon sword forged in the heart of the Eye of Terror that had the essence of a Greater Daemon bound within it. De Marche quickly found himself out of his league as his power axe had no effect. His armour was cut open and he had been grievously wounded. Decario's force sword was shattered and his Terminator Armour was cut open in one fell swoop. Fortunately, Decario used his Power Fist to rip the Excoriator's sword arm from its socket. Even though it was wounded, the Champion fought on, smashing down the Librarian and killing four more Terminators before Decario grabbed the nearest weapon and, with a prayer to the Emperor, took off the head of the Excoriator.[6d][11]

Decario then noticed that the weapon he had was the Daemon Sword. Instantly he felt that this weapon could be used to defeat Chaos. De Marche warned the Librarian that only he was trained to handle such weapons. Decario handed over the weapon and they returned to their ships. Once back on their ships, de Marche explained that this weapon could be used against Chaos and should not be destroyed. With the aid of Decario, they convinced the Chapter Master of the Fire Claws and, under the eyes of the Inquisitor, they explored the worlds around the Eye of Terror for more such artifacts. Over the decades that followed they slowly collected more relics and became known as the Relictors.[6d][6f][11]

It did not take long for the rest of the Imperium to discover their use of Chaos weaponry in warfare. A cell of Inquisitors, four Chapter Masters and an Emperor Class Battleship descended on the Relictors' Fortress Monastery and they were forced to hand over all relics and de Marche and take on a century-long penance crusade. De Marche was executed as a heretic and, as part of their crusade, the entire Chapter (all 10 companies) were deployed to Armageddon[8] in the Equatorial Jungles.[11] In spite of requests for urgent assistance, the Relictors largely pursued their own goals in the campaign.[6d] Notably, under the guise of eliminating Feral Orks in the jungles that could reinforce the main Ork forces besieging several Hives, the Relictors scoured the area in search of a monument of Chaos known as Angron's Monolith with the assistance of the Radical Xanthite Inquisitor Halstron.[6e][6i]

On finding the Monolith, Decario, now Chief Librarian of the chapter, tried to enact a ritual to remove a shard of a Daemon Weapon from it - a fragment from an axe that was once wielded by the Daemon Primarch Angron, left on Armageddon during the first war for the planet.[6k] As he tried to pull the shard from the monolith, it emitted a warp-scream which called the Feral Orks of the jungles to the Relictors' position. Fighting against the Orks, a Battle-Brother named Nico Tarryn duplicated Decario's feat aboard the Captor of Sin, pulling the shard from its prison and using the tool of Chaos to defend himself against the enemies of mankind.[6l] Entering a battle-rage, Tarryn used the shard to cut his way through the attacking Orks, pursuing them through the jungle before finally falling unconscious. The shard was claimed and placed with the two others that the Chapter had collected.[6m][6n]

Following the recovery of the shard, the Relictors would leave Armageddon after the Chapter's Librarians had a vision of a lidless eye weeping blood; the entire Chapter left the planet in their spaceborne Ramilles Class Star-fort[6m] for the Eye of Terror.[Needs Citation]

Arriving at the start of the 13th Black Crusade, the Relictors elected to operate independently of other Imperial forces, even clashing with Logan Grimnar on multiple occasions before the Great Wolf refused to communicate with them.[10a]

During this time, the Relictors are known to have fought against the Word Bearers on Subiaco Diablo and the Night Lords on Exeltra Minor. Their operations were not limited to sorties against the forces of Chaos, however; they also participated in a purge of Eldar raiders on Xersia.[10a]

Returning to the vicinity of Cadia, the Chapter once again refused to fight alongside the rest of the Imperial defenders, instead making way to an Agri World called Fremas.[10b]

Conflict with the other forces in the area increased as the Relictors descended deeper into the Eye of Terror in their search for tools of Chaos to turn against their owners. This conflict eventually culminated with a Relictors raid on the remote Diamedes Archive, where the Space Marines repulsed a Chaos attack, before destroying an Inquisition force that was guarding a Chaos artifact of great power and claiming it for their own.[10b]

Continued conflict with the Inquisition during the 13th Black Crusade resulted in them being declared Excommunicate Traitoris and were all but destroyed by the Grey Knights under the command of Inquisitor Cyarro. Only a few hundred now remain, and it is suspected that these survivors have fled to the relative safety of the Eye of Terror.[Needs Citation]

It is currently unknown whether these survivors have thrown in their lot with the forces of Chaos or continue their struggle of trying to turn the dark powers against them for the good of humanity, much like another of the Renegade chapters, the Soul Drinkers.[Needs Citation]

The Relictors are mostly organized along Codex lines. The main exception to this is the existence of the Conclave, a collective of members of the chapter that guards the chapter's deepest secrets.[6i] 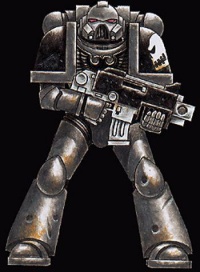 A Relictors battle-brother, as portrayed on the Armageddon Campaign website

The Chapter's symbol is a white skull in profile on a black background with dark grey borders.[11]

Following the Chapter's exile from their homeworld in roughly 948.M41[Note 2], the Relictors became a Fleet Based Chapter based out of a Ramilles Class Star-fort known informally as their 'sky fortress'. Although the fortress had a name, it was not used often (with many in the chapter seeing the name as outdated) and very few even remembered it.[6d]

Within the bowels of the fortress-monastery lies the Vault, the repository of artefacts that the chapter has collected. The Relictors were forced to relinquish most of their collection at the commencement of their penance crusade, but have begun to gather more.[6f]