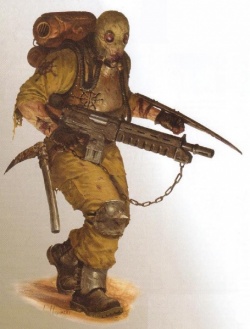 Renegade Infantry are the standard foot soldiers of the Lost and the Damned. These fighters are drawn from innumerable sources from renegade militia to traitorous Imperial Guard, to simple workers and misguided fanatics with stolen weaponry. Just as their origins vary, so too does their skill and dedication to Chaos. Their leaders often place little value on these warriors, spending their lives in battle with no remorse.[1a]

Of a higher calibre than most warriors of Renegade armies, infantry veterans are often traitorous Imperial Guardsmen, highly trained private armies, or mercenaries. Such troops are troops are irredeemably steeped in the vile influence of Chaos, given to foul practices and abominable rites intended to secure the favor of their Dark Gods.[1b]