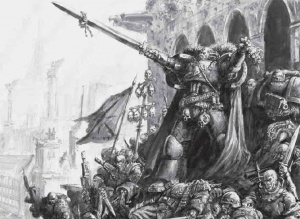 Desertion amongst the ranks of the Adeptus Astartes is extremely uncommon. However, when a Space Marine Chapter is overstretched, it is impossible for Chaplains to monitor every battle-brother. Isolated, Space Marines on extended duties can become divorced from the Chapter's teachings and feel their skills are wasted or their dedication overlooked. Growing thoughts of doubt manifest, and without reassurance from Chaplains or comradely from his battle-brothers, a Space Marine might then decide he has sacrificed enough for Mankind and turn to more selfish goals. Freed from the dogma and traditions of their Chapter, Renegade Space Marines fully indulge in their superhuman abilities and warrior minds and are capable of great mayhem.[1]

Most Renegade Space Marines become pirates and brigands, but some may rule over worlds or entire systems, while others may work as mercenaries. Some, like the Soul Drinkers, may still fight the forces of Chaos and even remain loyal to the Emperor but are otherwise free from the Adeptus Terra. However, while Renegade Chapters may initially have little to do with the Gods of Chaos, they will almost inevitably turn to them at some point in order to obtain more power. From this point on, they are doomed to become dreaded Chaos Space Marines.[1]