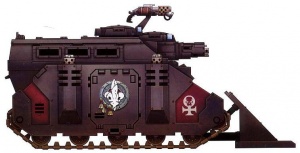 The Repressor is a heavily armored personnel carrier, used by the Adeptus Arbites and the Adepta Sororitas. Repressors are a variant of the Rhino, converted to extend the transport compartment and adding firing slits for the passengers' weaponry.[3]

The Repressor was originally used as an armoured personnel carrier by the Adeptus Arbites as a means of crowd suppression. The Sisters of Battle first used the Repressor on the Cardinal World of Avignor during the Avignor Uprising, when agent-provocateurs of a heretical sect caused a crowd of a million pilgrims to riot. The local Precincts was overrun by the mob, and the Battle Sisters of the Sacred Rose Preceptory, currently guarding the Cardinal's Palace, offered their aid. They replaced the Repressors' original non-lethal weaponry of water cannons and grenade launchers for the heavy flamers favoured by their order, then took to the streets to purge the heretics from Avignor.[1]

For years only the Sacred Rose used the Repressors, causing anger with other Orders, until the 291st Synod Prioris of Terra where the issue was hotly debated. Eventually it was decreed that the victory on Avignor had been the Emperor's divine will, and that the Repressor should be included in the canon list of sanctioned vehicles.[1]

Repressors armed with heavy flamers and storm bolters were also utilized by the local Enforcers on Potence ca. M42.[4]

The Repressor is armed with a cupola-mounted Storm Bolter and Pintle-mounted Heavy Flamer, with Dozer Blades as standard equipment. Its modified transport compartment allows all six passengers to fire with any type of weapon from within the protection of the vehicle. It can be further upgraded with Blessed Ammunition, Extra Armour, a Holy Icon, Holy Promethium, a Hunter-killer Missile, Laud Hailers, a Searchlight and Smoke Launchers.[1] 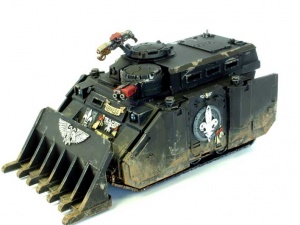 Repressor (as fielded by the Adepta Sororitas)[2]