The Repulsive Grand Cruiser is a Chaos starship.

The prototypical Grand Cruiser: the firepower of a Battleship carried on the hull of a Cruiser. Though its defenses are nowhere near those of Battleships, the Repulsive's firepower is nothing short of phenomenal, with lances, torpedoes, and massive amounts of long-ranged broadside weapons batteries.[1]

The Repulsive Class was originally known as the Imperial Navy Corinus Class Grand Cruiser. First commissioned in M34, the Corinus Class, the class gradually fell out of favor with the Navy. In the Battle of the Borghesh Channel, several Corinus vessels, the Undying Valour included, were captured by the Death Guard. Corrupted variants appeared thereafter in the hands of Chaos forces, causing a Forge World scholar to reclassify the vessel as Repulsive.[4] 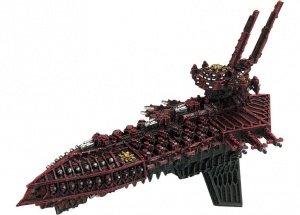