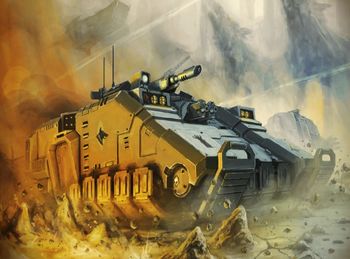 The Repulsor is recognisably of the same STC origins as the armoured vehicles used by their Space Marine brethern. Like the Primaris' weapons and power armour, the Repulsor is created in the forges of Mars; though whether its design is based on recovered ancient technology or from Archmagos Dominus Belisarius Cawl's own mind, is unknown.[1]

The Repulsor armoured transport is a deadly combination of maneuverability and brute force. Due to the turbine array at its rear, it has tremendous power, and it is held aloft by powerful anti-gravitic generators. The Repulsor is so heavily armed and armoured that it does not skim over the landscape as many grav-tanks do, but instead crushes the ground below it, grinding apart any caught within its field. The tank he designed is indeed capable of traversing almost any terrain, even lava streams or lakes of boiling acid should the need arise. However, it moves little faster than the armoured behemoth of the Land Raider, for its power is directed more into the manipulation of clashing gravitic energies than forward motion.[2]

Those that attempt to close with a Repulsor find themselves fighting against a wave of energy that disorientates and batters those nearby; due to the ventral plates being powered separately, this can even be directed by the craft’s pilot to better effect. Multiple layers of ceramite and adamantium overlap to make the Repulsor’s hull all but impervious to normal weaponry; even a direct hit from a missile will likely leave little more than a scorch mark. Though its primary role is to ferry Primaris Space Marines, the Repulsor is far more than a simple transport. It mounts a staggering variety of guns. The Las-talon and pintle-mounted Onslaught Gatling Cannon in the tank’s turret blasts apart enemy vehicles that could conceivably pose a threat, whilst the extensive suite of bolt weaponry, Auto launchers, Fragstorm Grenade Launchers, Krakstorm Grenade Launchers, and Heavy Stubbers lay down a storm of horde-killing firepower.[2] 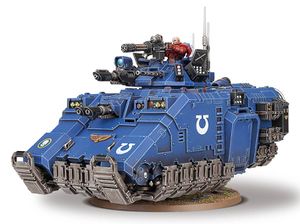