The Retribution Class Battleship is a large vessel used by the Imperial Navy and Basilikon Astra.[8] The class is a true ship of the line, being able to deliver a devastating broadside assault on the enemy, but is also equipped with impressive ordnance capabilities.

The Retribution features the distinctive armoured prow of the Imperial Navy which allows it to speed headlong at the enemy fleet, ignoring all but the heaviest fire brought against it. The ship is also as fast as the main cruisers of the Imperial Fleet. Being able to keep up with them gives extra support that can be vital in a fleet engagement.[1]

The main armament of the Retribution class are the rows upon rows of mighty weapon batteries lining its sides. These are able to fire a devastating spread over extreme ranges, crippling enemy ships before they even get within range to return fire. If closing on an enemy vessel, torpedoes fired from the Retribution are equally capable of causing extreme damage. As with many Imperial battle craft, the ship is also equipped with a series of Lance turrets along the dorsal of the ship. These are more accurate than the flank batteries, but their numbers are fewer. They are normally used for finishing off an enemy ship that the main weapons have crippled, or providing return fire when the battleship is closing on its foes. Many a ship have fallen to the power of a close range broadside of a Retribution class.[1] 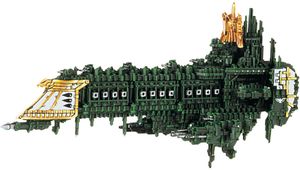