The Revilers are a Successor Chapter of the Raven Guard, created during the Second Founding in M31.[1][2][3]

The Revilers are one of the few Chapters to have been sired by the Raven Guard during the Second Founding and their ranks were drawn heavily from the Legion's veteran survivors of the Drop Site Massacre. Because of this, they have pursued a fierce vengeance against the Chaos Space Marines who betrayed the Raven Guard on that fateful day.[8a]

The Chapter's warriors have since proven worthy inheritors of Corax's legacy and possess exceptional skills in stealth warfare and ambush tactics. They have used these skills in their ongoing Shadow War with the traitor forces of the Alpha Legion, and have thwarted many of their insidious schemes[10]. The most recent conflict was in the Haedrax System, where the Revilers destroyed the Alpha Legion's cells within the System.[8a] 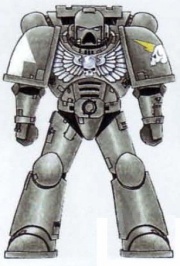