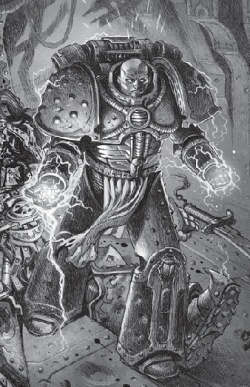 Revuel Arvida during the Horus Heresy

Revuel Arvida was a Sergeant of the 4th Fellowship of the Thousand Sons Space Marine Legion during the latter stages of the Great Crusade and the onset of the Horus Heresy. A member of the Corvidae, he was part of a fleet element of his legion that was dispersed under secret orders by Magnus the Red prior to the Battle of Prospero. Approximately six months later he returned to Prospero under the command of his Fellowship Captain, Menes Kalliston, in an attempt to discover the fate of the other Thousand Sons.[1]

Later during the Horus Heresy Revuel Arvida was transformed in an arcane ritual into Janus[5], who would go on to become the first Supreme Grand Master of the Grey Knights.

Revuel Arvida was a member of the Corvidae cult of the Thousand Sons, whom Ahzek Ahriman considered to possess great power. In spite of this, he was held back in rising through the Legion's hierarchy by his perceived lack of deference and respect owing to his tendency to question all things. He did achieve bonding with a tutelary, Ianius, and was a Sergeant at the outbreak of the Horus Heresy.[5]

Stationed amidst the Thousand Sons fleet, Arvida missed the Battle of Prospero and in fact remained ignorant of it for some time. Several weeks after dispersing, his Captain, Menes Kalliston, became worried at their inability to contact Prospero, and decided to turn his vessel - the Geometric — towards home. Severe warp storms hindered their progress, as well as attacks from Imperial forces they attempted to communicate with; it was six months before the under-crewed Geometric achieved orbit over a desolate and burned planet. Arvida did not especially agree with Kalliston's decision to return home, feeling that there were other mysteries surrounding what had happened to their legion to solve first, but loyally agreed to accompany his Captain to the surface.[1]

Exploring the ruins of Tizca, Arvida discovered armour fragments belonging to the Space Wolves Legion, as well as obscene daubings on what few walls remained standing. He cautioned Kalliston that there may be Wolves remaining on the planet, shortly before they came under attack from power-armoured warriors of indeterminate heraldry. The others of his fireteam slain in the ambush, Arvida was cut off from Kalliston and the rest of the squad by the attackers. His prescience informing him that Kalliston and the others were in serious danger, he advised immediate retreat, but received no reply. Sensing his own future tightening around him, Arvida took cover shortly before two enemy Marines moved past his position. Using his precognitive powers, he loosed off two shots from cover at the space they were a second from walking into...securing a perfect headshot on one, but only a graze on the other. The survivor closed into melee range, but Arvida was able to use his powers to weave through his chain axe swipes and punch three shots into the attacking marine's face. Victorious, he gazed upon his attacker's insignia...shocked by the apparent insanity of being attacked by a World Eater.[1]

Returning to their landing site, Arvida discovered it overrun by several squads of Angron's Legionaries. Realising that he had to run and hide, his revulsion at the World Eaters' actions made him look once more into the future and find the thread of fate that would result in the death of the World Eaters' Captain present, blowing his head off with prescient timing, before making his escape. Operating on the assumption that the Geometric had probably been destroyed, Arvida resolved to hide himself away and begin a personal quest to discover exactly what had happened to bring ruin upon Prospero, and then to use all the knowledge at his disposal to see the forces behind it destroyed. His own precognitive powers were able to inform him that he would not die upon Prospero.[1]

After an unknown amount of time passed Arvida discovered the Keshig of Jaghatai Khan fighting against the shades of the Psychnuiein that had been created by the psychic devastation wreaked on Prospero. Using his psychic powers to save them he made contact with Qin Xa, leader of the Keshig, and offered to help them locate their missing Primarch. Arvida later fought with the Keshig against the Deathshroud while Mortarion and Jaghatai Khan fought, and ensured that the White Scars could escape Prospero by creating a beacon for teleportation with his powers. He was accepted as a guest of the White Scars and was last seen with them aboard the flagship Swordstorm.[2]

Arvida joined the Scars following the 2nd Battle of Prospero and spent his time recovering with Storm Seer Targutai Yesugei. Slowly, he began to regain his strength and his precognitive powers. Yesugei made repeated attempts to convince Arvida to join the Scars, even commissioning a hybrid pauldron to replace the one broken during the fighting. Arvida contemplating it, going so far as to almost fleeing, because he believed that he had a destiny connected to the raven image associated with the Corvidae's emblem. During this time, he began to experience the effects of the curse.[3]

Four years after the start of the Horus Heresy, the Scars are trapped behind enemy lines and unable to return to Earth and Arvida finds himself barely holding back the Flesh Change. The death of Arvida's Qin Xa during the Battle of the Kalium Gate wounded him greatly, but in his final moments his friend urged him to find a cure for the flesh change above all else.[4]

Ultimately, Targutai Yesugei sacrificed himself by activating the space station Dark Glass, which punches a hole through the warp and into the Webway. Arvida was tasked by Yesugei's final message to lead the Scars back to Earth, and he uses his great psychic might to guide the fleet while the ships are assaulted by demons. After finally guiding the fleet closer to Earth, he begins to succumb to the change and is rendered unconscious. Khalid Hassan, agent of Malcador, arrives and promises the Scars that Malcador will treat his condition and that they have been waiting for Arvida to come.[4]

Deep in the Imperial Dungeon, Malcador attempted to bind a fragment of Magnus the Red which had remained on Terra after his ill-fated message damaged the Webway Project, intending to use the resulting 'abomination' to guard the gate, as the Emperor had originally intended Magnus to do. The Khan demanded the Sigillite stop, but arrived too late. When Arvida's mutated body began to be consumed by psychic fire, unable to contain the power of the shard, Malcador went to kill him, but the Khan insisted that the sorcerer was his ward and must be given his chance. Smashing the arcane machinery in the chamber, he freed the amalgam of Magnus and Arvida from the suppression fields and wards.[5]

The energy consuming Arvida's body solidified into matter, taking the form of a space marine without any trace of the flesh-change and one eye swollen with scar tissue. Not the shadow-primarch in a host that Malcador had intended, nor entirely Revuel Arvida, the new title he asked to be called by the name it had always had: Ianius.[5]

Ianius' name would ultimately become better known as Janus, the first Supreme Grand Master of the Grey Knights. He was one of the eight Space Marines whom Malcador the Sigilite took to the moon of Titan towards the end of the Horus Heresy, Janus was appointed as Supreme Grand Master when Malcador returned to Terra shortly before the Battle of Terra and oversaw the Chapter through its first challenges.[6]

At the conclusion of the War of the Beast in 546.M32, the mad Grand Master of Assassins Drakan Vangorich purged the High Lords of Terra in what became known as The Beheading. The last surviving High Lord, Inquisitorial Representative Wienand, was made aware of the existence of the Grey Knights and urged to seek out Janus shortly before the death of co-Representative Veritus. Wienand was given Veritus' key and was able to travel to the Citadel of Titan, where she met Janus. Despite her encounters with many Space Marines, she was overcome by his presence.[7]

Arvida was stocky, with a bull neck and angular jaw, looking like a typically pugnacious Space Marine. A member of the Corvidae, he was skilled at precognition, though found his powers harder to access in the time after the fleet dispersal. Arvida was noted to be a skeptical soul by his Captain, and required convincing about the wisdom of investigating the ruins of Prospero. Kalliston appealed to Arvida's interest in learning hidden secrets and recovering objects of knowledge in order to tempt him into agreeing with the return home.[1]

Unusually for a member of the Thousand Sons, Arvida professed to never have had complete faith in the doings of his primarch, Magnus. The ruins of razed Prospero only served to convince him that he had been right to be doubtful of some of Magnus' strategies, and resolve that it was folly to continue to follow them now, instead dedicating himself to a his new quest.[1]

As Janus, he was described as having a face that was leathery, tanned, and wrinkled with fine lines. The skin was folded with age over his eyes. One his eyes had a pronounced squint, due to his merge with Magnus. He also had several long service studs.[7]