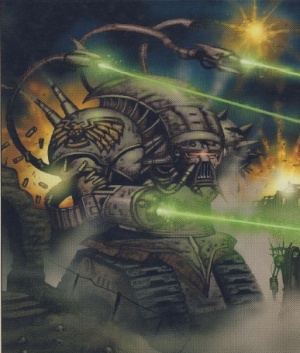 A War Robot of the Imperium's Legio Cybernetica[9]

Robots are artificial constructs capable of completing complex tasks automatically. Robots are used by a variety of factions across the Galaxy both past and present.

During the Dark Age of Technology Humanity heavily used robotic constructs. This culminated in the creation of the Men of Iron, which eventually revolted against their masters in a devastating war.[1]

Due to the traumatic experiences against the Men of Iron the Imperium even in its early days had strict laws forbidding the creation of Silica Animus or Abominable Intelligence. Imperial Robots, known as Automata, are far more simplistic by comparison and heavily regulated by bodies such as the Legio Cybernetica of the Adeptus Mechanicus. The Imperium further restricts the need for complex robotics by utilizing biologically-based Servitors for tasks traditionally reserved for robots. Creating a robot whose cognitive abilities are beyond set regulations is a severe form of Tech-Heresy brutally punished by the Mechanicum's Prefecture Magisterium.[3]

The Dark Mechanicus and Warpsmiths of the Chaos Space Marines normally favor Daemon Engines over standard robots. These are artificial constructs, but contain the soul of a Daemon.[11] However during the early stages of the Horus Heresy it is known at Tech-Priests of the Dark Mechanicum dabbled in robotics, which culminated in the creation of the Kaban Machine.[9] Furthermore in earlier lore Chaos Androids were constructed by Chaos Squats.[12] Chaos Robotics have manifested themselves in other ways, such as the Bronze Malifects.[13]

During the Eldar Empire, all labor and warfare was conducted by mechanical constructs dubbed Spirit Drones.[4] Due to the Fall of the Eldar, today the Craftworld Eldar do not utilize robots. The Craftworld Eldar instead utilize Wraith Constructs, which hold the soul of fallen Eldar within Spirit Stones.[14] The Dark Eldar however still utilize part-mechanical part-biological artificial constructs known as Pain Engines such as the Talos Pain Engine and Cronos Parasite Engine.[5]

Though capable of great technological achievements the Orks enjoy personally experiencing all aspects of warfare while relying on Grots and Snotlings for any menial labor and as a result do not normally use robots. However some Mekboyz have nonetheless created their own robots in the form of their various enemies known as Tinboyz.[7]

The Tau Empire heavily utilizes automated constructs most notably in the form of Drones.[6]

The Necrons themselves are purely mechanical beings, but contain the original essences of biological lifeforms known as the Necrontyr. However the Necrons still utilize a large number of purely artificial creations known as Canoptek Constructs that perform a variety of lesser roles.[8]

The Squats of the Leagues of Votann do not possess any of the taboos regarding artificial intelligence seen in some other civilizations. Their society is home to an entire class of sentient machines collectively dubbed Ironkin, and they utilize other less advanced robotic drones for other tasks.[16]