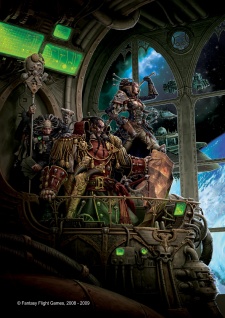 A Rogue Trader is a combination of freelance explorer, conquistador and merchant. They are Imperial servants, given a ship, a crew, a contingent of marines or Guardsmen and carte blanche to roam the worlds beyond Imperial control.[!b]

In their task of exploring and exploiting uncharted regions of the galaxy, Rogue Traders might come across worlds harbouring long forgotten human civilisations which will be incorporated into the Imperium. Other times they find empty or alien-dominated planets ripe for colonisation or exploitation.[1b]

Rogue Traders are often flamboyant individuals, commonly dressed in the most extravagant finery they can acquire. However, each Rogue Trader is a unique individual from a particular background, some newly created Rogue Traders come from backgrounds such as the Imperial Guard, the Imperial Navy, the Merchant Fleets, the Administratum or even the Inquisition where they will have developed unique outlooks and approaches to situations.[1b] Some Rogue Traders are relatively poor, possessing a single ancient and dilapidated ship. Others are incredibly wealthy and powerful and have whole fleets and entire private armies at their disposal. Certain favoured individuals may even call upon detachments of Space Marines having entered pacts with individual Chapters. Some Rogue Traders operate as mercenaries, renting the service of their ship(s).[1b]