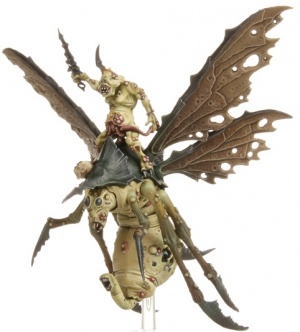 Rot Flies are Beasts of Nurgle that have since transformed into nightmarish insectoid-like creatures[2], these colossal Daemonic insects have an appearance so repugnant it is said to be able to scar the mind. Rot Flies are among Nurgle's most loathsome creations, and only the Black Library of Chaos speaks of the process by which they are created. Hatching from within the Garden of Nurgle, some Beasts of Nurgle develop bitterness at the rag-doll inactivity of their mortal playthings. This eventually leads to frustration and ultimately an aching resentment. Over the millennia, a seed of malice grows within the Beast's heart, and the final straw comes when the Beast is betrayed unto death by those it wishes to call its friends. Seeking reconciliation, the Beast will put side its doubts and charge at its mortal target. Should it fall in the attempt and be banished back into the Warp, where it is then dropped into the Garden of Nurgle out of despair it can not return to its mortal plaything festers into a cocoon that will eventually give birth to a putrid fly. These flies have a number of horrifying abilities, such as spraying corrosive acid onto victims to liquefy them, allowing their remains to be sucked up and digested.[3a][3b]

Rot Flies are often used as mounts by high-ranking Plaguebearers, forming squadrons of Plague Drones.[1] They wield a variety of foul means of attack such as a Venom Sting and a Prehensile Proboscis.[5]

It is known that in some occasion the Flies may had engines instead of theirs ugly wings.[4]