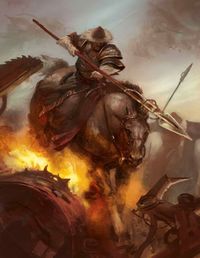 An Attilan Rough Rider in action.[1]

Rough Riders are fast moving troops of the Imperial Guard, mounted on a horse/animal/beast/grox/bike or other mount.

They are deployed on the battlefield as scouts, patrol units and for quick hit-and-run attacks; living mounts allow Rough Riders to function far from Imperial supply lines, in terrain unsuitable for mechanised warfare, and avoid detection.[1] Though armoured no better than the average Guardsman, their speed and manoeuvrability is their true asset on the battlefield, able to charge into the enemy's flanks for devastating effect.[1] Rough Riders are primarily trained for close combat, not ranged assault, they are often armed simply with a hunting lance and laspistol or other close-combat weapon, as well as frag and krak grenades; some squads will arm themselves with special weapons such as a flamer, grenade launcher, meltagun or plasma gun. Squads are generally composed of four to nine riders in addition to a Sergeant, who sometimes carries melta bombs in addition to a power weapon or plasma pistol.[1]

The Imperial Guard are not known for their exclusive use of Bikes, but occasionally Rough Rider Squadrons may be mounted on Bikes rather than the native animals. This confers no benefits or disadvantages to the rider, but is a fairly easy conversion project.[Needs Citation]

The Catachan Jungle Fighters utilize unique Rough Riders, who fight atop one of the mighty Giant Reptiles native to Catachan's deadly jungles.[2]