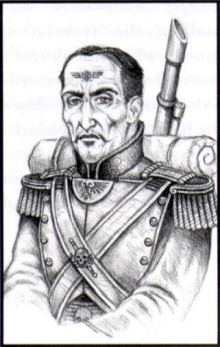 The Royal Volpone were Imperial Guard Regiments active during the Sabbat Worlds Crusade.

Drawn from the aristocratic families of Volpone, the Royals were proud to the point of arrogance.[2a] The 50th, in particular, called themselves "the Bluebloods"[2a][2b], considering themselves "the noblest regiment in the Imperial Guard."[2a]

They are accompanied by lowborn Volpone servants, called Mil-serves. Like all of Volpone's lowborn, the Mil-serves are not permitted to carry arms, even during battles. Any that are caught with one, face being hanged or whipped to death by their Regiments. Because of their status, some Royal Volpone are also abusive towards the Mil-serve and during the time of the Sabbat Worlds Crusade, the Regiments' officer class called them by the derogative slur Deg. It meant degraded and using the slur was frowned upon. Efforts were made to stop its use during that time, but it was not completely done away with.[4]