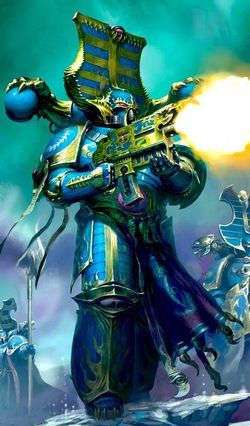 
Together with the Aspiring Sorcerers of Tzeentch who lead them, they form the basic Thousand Sons squads.[4a][4b] The sorcerers and lords of the Thousand Sons use these "Rubicae" as bodyguards and enforcers.[5]

Rubric Marines were created shortly after the Thousand Sons Legion fled to the Eye of Terror. Having dealt with sorcerous practices and energies for decades and now under the sway of Chaos, mutation ran wild within the Legion.[4a] In order to put an end to this warping process, a mighty spell called the Rubric of Ahriman was cast upon them. However, the powers unleashed reduced all Marines without psychic abilities to ash, sealing every clasp and joint of their armour and trapping their souls within.[1][2][3][4]

These living suits are still capable of fighting and receiving orders from their masters and with no fear and no will of their own they make perfect bodyguards and guardians. Without an Aspiring Sorcerer to guide them, Rubric Marines tend to fall into inactivity but in combat their battle-hunger returns and they tend to move more like their former living selves[Needs Citation].

A single Sorcerer is capable of controlling a whole squad and will use his powers to enchant their bolters and turn their ammunition into explosive Inferno Bolts. These magical shots are able to ignore mundane armour and burn the souls of sentient beings.[4a]

When a Rubric Marine dies the dried remains of his material form pour from the rents of their armour and are scattered to all winds of the battlezone. After this, only the most powerful sorcerers could re-collect this dust, reseal the armour and through the complicated ritual reanimate the Rubric Marine to a new "life". The sorceries required for this deed are very dangerous and just one syllable misspelled could drive the Sorcerer insane or kill him outright.[7b]

The Ynnari have demonstrated the ability to restore the Rubicae, using it as a ploy to throw off Ahriman during his battles with them. This process completely return the soul of Thousand Sons with their personalities and full memory - continuing as if Rubric of Ahriman never started.[6]