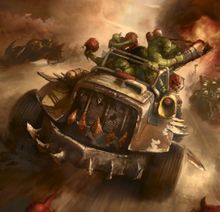 The Rukkatrukk Squigbuggy is a type of Ork vehicle, that makes use of various types of Squigs.[1]

The first Rukkatrukk Squigbuggys were created by enterprising Snakebites in order to feed Speed Freeks on the move. Sporting pens full of Squigs, Squigbuggys were originally intended to move alongside other Ork vehicles and feed their crews. Once a bag of Teef was tossed to the Squigbuggy crew, a tasty Squig was loaded into the vehicles Squig Launcha and fired at the customer. It is said that after a rabid Squig was launched at a customer and ripped his face off that the military applications of the Squigbuggy was understood.[1]

Nowadays, Squigbuggys are common sights among Ork vehicle mobs. Easily identified by their rugged construction, these vehicles employ close-range living artillery to wreak havoc amongst enemy ranks. Rukkatrukks typically mount both a Squig Launcha and a Heavy Squig Launcha. The Squig Launcha is Ork-portable, often tossed between one crewman and another in order to quickly deliver the perfect squig into the middle of an enemy formation or vehicle. By comparison, the Heavy Squig Launcha is bolted to the vehicle's chassis and is operated by its gunner. These guns fire three types of Squigs: Bitey Squigs, Bile Squigs, and Boom Squigs.[1] 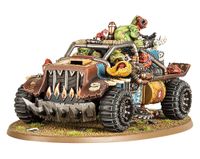