Runtherds (also known as Slavers) are Ork Oddboyz who act as the shepherds and slave-handlers of Greenskin society. 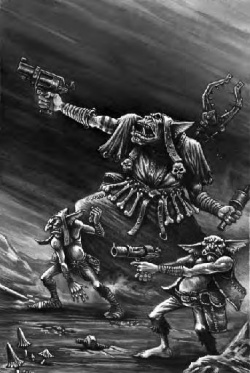 Runtherds are rare orks who have the patience to take care of Gretchin and Snotlings. Far from detesting their jobs, Runtherds often take pride in their jobs and try to breed the fiercest Grots and Snots they can. Also, they take full credit for any brew of fungus beer crafted by Gretchin in their rabble. Their characteristic weapons are whips, Grabba Stikks and Grot-prods, tazer-like weapons created by meks and employed by progressive Runtherds. They are often seen leading Gretchin mobs into the fray or ordering around the Gretchin crews of Big Gunz. They often make use of Squig-hounds to eat errant or fleeing Grots in battle to "increase" the morale of their Gretchin mob.