Ork Runtherds keep their herds in lines with help of various crude devices.[1] 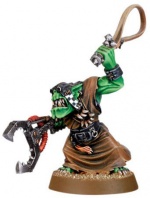 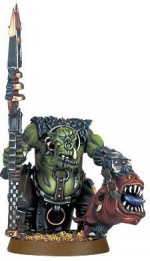 The Grotwhip is a barbed lash several metres long used by Runtherds to keep Grotz in line. Like all Ork weapons, the Grotwhip is larger and more brutal than its human counterpart, the Groxwhip.[2]

Grabba Stikks are the traditional tool of Runtherds, used for throttling anything in arm's reach. Consisting of a sturdy metal pole, a deceptively simple pulley system, and an articulated barbed claw, grabba stikks are used to capture and restrain potential slaves. In battle, Runtherds often use them to throttle enemies within the weapon's reach.[1][2]

The more progressive Runtherds use a simple Mek invention known as Grot-Prod to deliver a short, sharp shock to an errant Grot's vunerable parts. It is similar to a cattle-prod, and works by delivering jolts of electricity into a Grots body. These electric prods can also be made into a formiddable close combat weapons by increasing the voltage to lethal levels.[1]