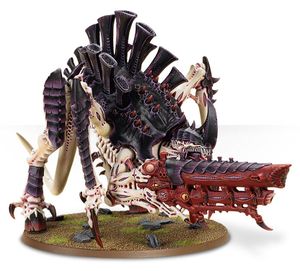 The Rupture Cannon is an enormous Tyranid Biomorph found on the Tyrannofex and is the most powerful Tyranid weapon to be carried by anything smaller than a biotitan. Each time the rupture cannon fires, two different cannonball-sized projectiles are launched in quick succession. The first is a bloated tick that bursts upon impact, showering the target in an oily substance. The second is a seedpod with a near-impenetrable shell. As the seed smashes into the target, it is coated in the oily substance left behind by the tick. The fluid dissolves the toughened shell in a fraction of a second which triggers a chemical implosion powerful enough to decimate armored vehicles from the inside out.[1]